Fried grasshopper and tamarind ice cream? Well, actually it's a sherbet, but nevertheless it's one of the more exotic treats available at the annual Festival de la Nieve, Mezcal y GastronomĒa in Tlacolula, Oaxaca.

This exquisite extravaganza of flavors, aromas and unmatched color and pageantry, takes place each year at the end of the Easter celebrations. For 2013, it will take place from April 5th through 7th.

Tlacolula de Matamoros, a 30 minute drive from the city of Oaxaca, is best known for its vibrant Sunday marketplace where women dressed in traditional native garb come down from their hillside villages to buy and sell all manner of products. 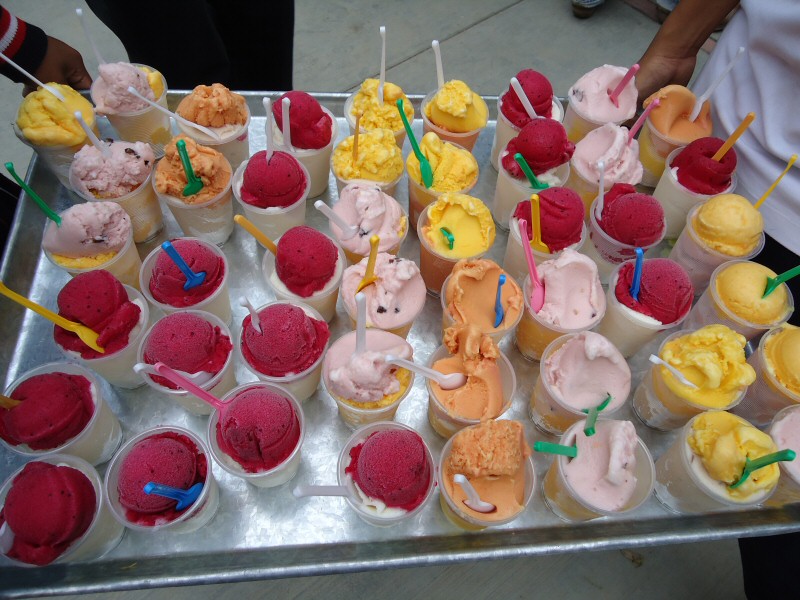 Nieves in many flavors at the Tlacolula Nieve Festival

But many visitors to the state's central valleys are not aware that there are other customs associated with the city and environs, and it's those rituals which are precisely what organizer Alvino Cruz Melchor wants both tourists and Oaxacan residents alike to experience, to appreciate and to delight in:

"At the conclusion of Semana Santa processions and masses, it's customary for friends, family and compadres to gather and enjoy homemade nieves, and sometimes aguas frescas [fresh fruit juices] as well as a variety of local fruits marinated in vinegars. But it's the nieves which are the most traditional, popular and provide a sense of pride in and for our community. Just look at all the nieve stands along that that one walkway, popular for Sunday market visitors."

In 2012, approximately 30 nieve producers participated in the festival, with more than 50 flavors available for sampling and for sale, ranging from the more common flavors such as those found in downtown Oaxaca neverĒas, to the more exotic, both water and milk based. For 2013, the target is to have as many as 60 different sherbet producers in attendance.

"Our goal is also to celebrate and promote the longstanding mezcal, handicrafts, music and broader gastronomic traditions in the district of Tlacolula, and hence while nieves are the main impetus for the festival, we can't forget the rest; they deserve our support and our promotional efforts," Cruz Melchor continues.

In 2012 there were 15 mezcal producers exhibiting at the festival. For 2013 there will be a photography exposition outlining the history of the region's mezcal production, as well as a conference centering upon the spirit's past, present and future. The district of Tlacolula contains literally hundreds of palenques, spread throughout some of the most popular mezcal producing areas in all Mexico, including Santiago Matatlán, San Juan del Río, Santa Ana del Río, San Dionisio Ocotepec, Tlacolula proper, Mitla, the Albarradas villages, and the list goes on.

In 2012, 20 craftspeople exhibited their artistry, and for 2013, organizers' goal is to substantially increase that number. Nearby San Juan GuelavĒa is noted for its fine basketry made of carriso (bamboo-like river reed), San Marcos Tlapazola for its red clay terra cotta pottery, and Teotitlßn del Valle for its tapetes, carved gourds and handmade beeswax candles.

Other foodstuffs for which Tlacolula is noted include tejate, the pre-Hispanic corn and cacao based drink; pulque, the fermented beverage derived from the honey water of the pulquero class of agave; its own unique formulation for making barbacoa of goat and sheep in an in-ground oven; and scrumptious pan de Tlacolula, loaves of egg bread made with any combination of chocolate, raisins and cinnamon swirled through the center.

The annual Festival de la Nieve, Mezcal y GastronomĒa de Tlacolula, like most grand Oaxacan fiestas, includes much more. As tradition dictates, towards the end of the merriment there is a Guelaguetza, that uniquely Oaxacan celebration of the state's broad diversity of cultures, expressed through song, dance and vivid indigenous dress. For 2013, the Guelaguetza begins at noon, Sunday, April 8th.

Anyone for nieve of mango, chile piquín and worm salt?

The following is the schedule of events for the 2013 festival, the principal venue being the area around the esplanade in front of the Tlacolula de Matamoros municipal offices:


Alvin Starkman operates Oaxaca Culinary Tours with Chef Pilar Cabrera Arroyo (http://www.oaxacaculinarytours.com) and Casa Machaya Oaxaca Bed & Breakfast with his wife Arlene. He is an aficionado of mezcal as well as of other beverages produced in Oaxaca, in particular pulque and tejate. Alvin often assists visitors to the central valleys who are eager to learn about the state's distilled and fermented drinks.