Every two weeks or so I'm asked about the change in the number of artisanal mezcal distilleries, or palenques, in and around the central valleys of Oaxaca, given the dramatic rise in the spirit's global popularity over the past couple of years, and the meteoric increase in the number of export brands. "Where do they all come from; there must be a couple a week at this point," a colleague integrally involved in the American retail mezcal business asked me in May, 2015.

My stock answer used to be that the number of new palenques has effectively not changed, but production of course has increased significantly along with more palenques becoming certified by CRM (Consejo Regulador del Mezcal); that is, those which then become legally being able to produce mezcal for export. But the answer is much more complex, and after due consideration I now realize that it was not entirely accurate. 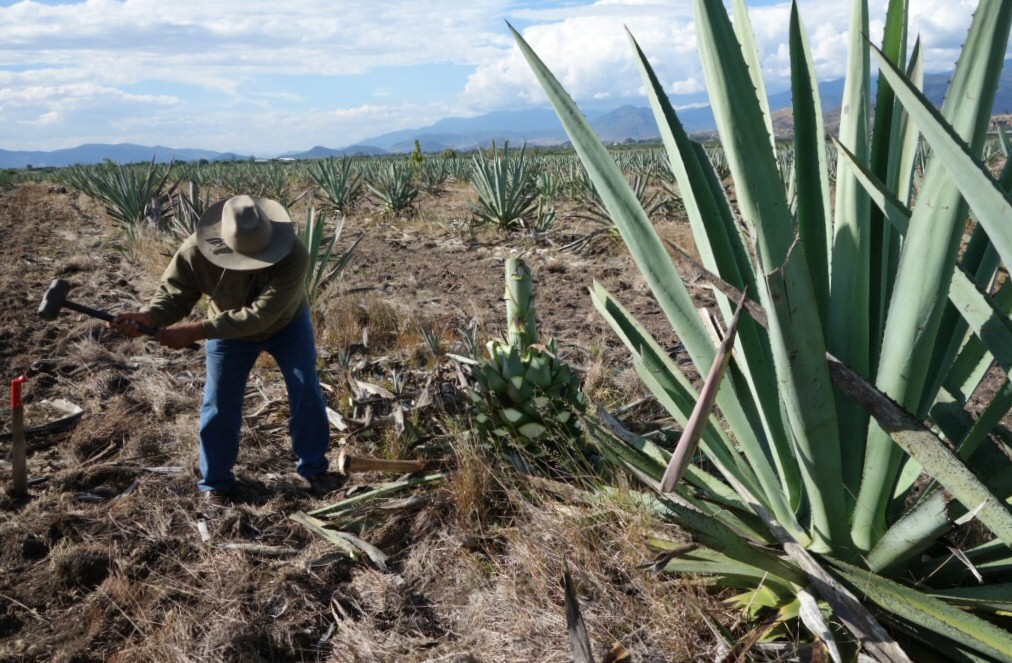 Early in the decade a curious phenomenon began to become apparent to me. In the wake of the US economic crisis, many Oaxacans began losing their jobs in the US; but that in and of itself was not an earth-shattering revelation. However, at the same time, pressure upon their palenquero family members began increasing as mezcal's star rose, and there were not enough workers de confianza (trustworthy) to do the job required to meet the demand for production. Sons and nephews and their families began returning to Oaxaca to help their fathers and uncles plant and harvest agave, and proceed with the subsequent processes leading to distillation of mezcal.

In addition, other Oaxacans, former palenqueros who headed north during the lean years of mezcal production, have elected to return to their roots, and invest their savings in home and palenque construction. The latter has in part been facilitated by a federal government subsidy program, wherein the feds are contributing between 60 and 90 percent1 of the cost of certain equipment deemed essential for the increase in production of artisanal "certified" mezcal; fermentation vats, gas powered crushing machines, scales, laminated roof construction (over ovens, important during the rainy season), and 1,000 liter stainless steel storage vessels.2

On the other hand, a palenquero friend has stated that the key to the increase in production is the number of copper pot stills, and that nothing else significantly impacts increased production capacity. For example, a 300 liter copper still on average churns out 750 - 1,000 liters of mezcal per month. It doesn't matter how many in ground ovens, horses and tahonas or fermentation vats there are.3 If you build more stills, mezcal production will increase. You can have ten fully fermented vats lined up and ready to go, but if still capacity is limited, it doesn't really matter how many there are.

About eight years ago one producer in Santiago Matatlán who now distills for two popular export brands, had one brick and cement lined room for steaming his agave, having at the time elected to deviate from using a traditional in ground oven for baking. He then built a large horno capable of cooking more than 15 tons of agave piña at a time over firewood and rocks. He began with one multi-chambered copper still unit, then added a column still, and finally four large traditional copper alambiques. So while his ovens doubled in number, he has remained with one horse and tahona. It is suggested that it has been the number of stills which has been the main factor in his ability to increase production.4

Two successful artisanal commercial producers in San Dionisio Ocotepec, virtually neighbors, have addressed the problem of meeting increased demand, in different yet similar ways. "A" palenque has simply built a brand new facility a few kilometers from the original one. "B" palenque is in the planning stages of constructing a new building alongside his existing facility to house additional stills, likely using federal grant resources for at least additional fermentation vats, since as they say "the money is there."

Another San Dionisio Ocotepec inhabitant returned from a two decade residency in the US just a couple of years ago, with enough dollars to enable him to build an impressive American style home, and once again using federal funds to help with his palenque. He had attained the requisite knowledge for producing mezcal while in his teens and twenties growing up in San Dionisio Ocotepec. By Contrast, a former US resident now in charge of the new "A" palenque noted above recently returned to Oaxaca with very little industry knowledge. However with family members steeped in the tradition of growing agave and making mezcal, the learning curve will be short.

San Baltazar Chichicapam is best known for its mezcal produced for two popular export brands. However, there are at least a couple of dozen other small scale artisanal producers in the village. Until about 18 years ago, most "rented" a palenque from a palenquero, paying an often lofty percentage of the mezcal produced as the fee. Now, a larger co-operative style palenque provides the service at a reduced charge. But even so, with federal funds available and pressure brought to bear to a varying extent by CRM for palenqueros to become certified (and of course down the road have La Hacienda [the tax man] come knocking), palenqueros who had previously been renting, are now building their own palenques and are in the midst of certification. One inaugurated his palenque in mid - May, 2015.

Other brands which have been meeting with success as a result of a combination of marketing, product quality and brand owner acumen, are struggling to keep up with demand. It's a combination of staffing with workers de confianza and building additional stills. One brand which has met with impressive export market success in only two years, has palenqueros producing for it in two different districts of Oaxaca. It's seeking a third region or palenquero with quality product with whom the brand owners can work. Its particular business model appears to be to not let current palenqueros grow too much for fear of quality of product being adversely affected, in favor of finding a third.

New players are primarily5 non-Oaxacans from Mexico City or outside of the country, seeking opportunities to associate with families with a longstanding and strong pedigree in mezcal production. A palenquero family in San Pablo Güilá is partnering with a Mexico City family of means, the latter with contacts for export to the US and China. Capital infusion has been from the private source alone. Many Mexicans are of the belief that the less involvement with government, the better, regardless of a federal carrot dangling in front of them.

There is yet a further scenario playing out in Oaxaca, sometimes but not always involving tapping federal funds. Employees from one palenque are at times hired by an individual, partners or a family with financial resources, to open up a new palenque. Someone can be transformed overnight from a helper (ayudante or chalán) to a maestro palenquero, with automatic prestige and with that title a corresponding significant increase in income. In this case as in most others, we are once again dealing with combining an infusion of capital with experience in the industry, the latter at times dating back generations.

So the norm, at least for 2015, appears to be more family members with some background in distillation becoming involved in mezcal production with the aid of federal funds or private domestic and foreign cash infusions; building new palenques or expanding existing ones through increasing the number of copper pot stills, and to a lesser extent associated equipment. It is curious that, at least to my knowledge, the capital required to purchase the stills is not on the subsidy table. However private capital is always around the corner for purchasing stills, as well as prerequisite bottling equipment and more.

A final word about the "agave crisis." The crisis will come, assuming the foregoing continues. It is still not upon us. Every day one sees truckload upon truckload of piñas being transported from fields to palenques in and around the central valleys of Oaxaca. At least for now, it's the price per kilo of maguey piña which is driving the rumor mill. This benefits hardworking campesinos, now finally receiving payment at least close to proper value for their labor and time waiting for their agave to mature in the fields. From 1,300 pesos for a three ton truckload some six years ago, to now upwards of 20,000 pesos. Let the agave shortage begin!

Alvin Starkman operates Mezcal Educational Excursions of Oaxaca. He can be reached at mezcaleducationaltours@hotmail.com.

1That's the range in percentage I've heard from my palenquero friends, one of whom has told me that the subsidy amount depends on the particular region of the state, using a number of different related factors.
2Not particularly important except for the spirit consuming public's perception that any grade of plastic is less than desirable for storing, no matter for how short a time.
3Except of course if a nutrient is used to speed up the fermentation process; but even then, still capacity remains the same.
4His operation can hardly be termed artisanal or traditional, but it remains to be seen how CRM will categorize the mezcal he produces for those sophisticated owners of the brands. The palenquero is currently designing and building a machine to crush and extract the sugary juices from the piñas, taking his operation yet further removed from what we would reasonably consider traditional, artisanal or handcrafted.
5But certainly not exclusively. In the case of one particular brand, the owners are cousins from a rural Oaxacan community who worked for years in California. They had no prior knowledge of mezcal production, nor close relatives with knowledge to guide them. They amassed US dollars which enabled them to start from scratch. They read, asked, consulted, planted agave, and finally built and began operating their palenque.
This page has been visited times since May 2, 2011.
| Top of page | Main index | Search | What's new |